How to Get Your First Real Chin-Up
0

How to Get Your First Real Chin-Up 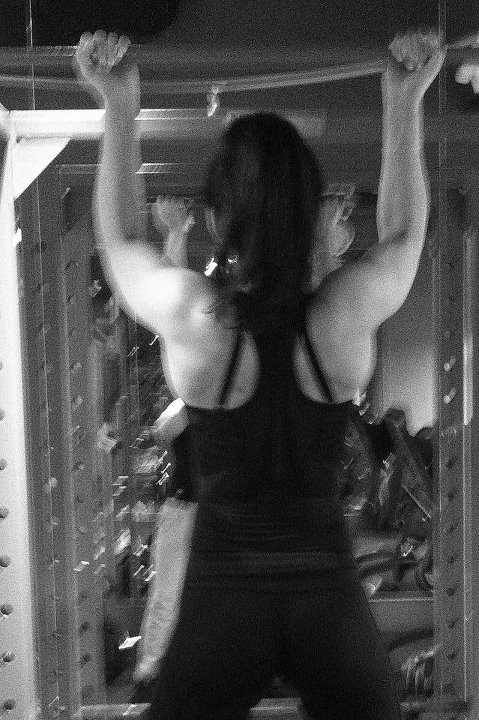 For as long as I can recall, I’ve been doing chin-ups of all sorts.

I did them at school.

I did them at soccer practice.

I did them in the army.

Now I do them in the gym or in the park, usually with rings.

What I’ve noticed, however, is that rarely can women do chin-ups. But not because it’s physiologically impossible for females to pull their bodyweight over a bar. It’s because, unfortunately, too many women fall for the general claptrap that chicks can’t chin.

I’ve never been one to conform to public opinion or what the majority of people think. So all I will do at this point is quote the great American philosopher, Ice Cube, and leave the matter at that:

You can’t move your bodyweight through space with higher aptitude than 80% of guys in the gym and be a weak and out of shape individual. It’s physically impossible.

Here’s how to work your way towards that elusive, first bodyweight chin-up.

Yes, you can train the lats (the primary muscle group involved in the chin-up exercise) with another vertical pulling movement like the lat pulldown exercise but strength is not only muscle specific, it’s also movement specific. That’s why how much weight you can move on the lat pulldown remains a poor indicator of your ability to move your bodyweight over a bar.

It’s not necessarily that the muscles are too weak to pull themselves over the bar (although that most often is a factor as well) but that they’re weak in the actual chin-up movement pattern.

It’s the same when we take someone who has been only squatting in the Smith machine, then have them learn the barbell squat. The muscle groups involved are the same, but the movement is completely different, and the free weight movement always proves to be more challenging.

Your muscles can generate higher forces on the negative, or lowering part of the chin-up movement than on the positive (pulling up) part of the movement. That’s why you’ll be able to lower yourself down, even if you can’t pull yourself over the bar just yet.

So while you can’t perform a real chin-up in the beginning, we can still build the musculature and strength of the lats while also practicing a part of the entire movement with negatives.

It’s important not to let gravity pull you down on the negatives. You need to control the descent and be able to stop the movement at any point throughout the range of motion if someone asked you to.

An effective way to perform negatives is to do them for time. What I mean by that is deciding beforehand how long a rep should take, then making sure that every rep of every set lasts the same amount of time. Depending on your starting level, this might be a 2 or 5 second negative. Once you no longer can lower yourself under control but are simply being pulled down by gravity or your form gets sloppy, terminate the set.

Whenever we’re trying to learn a new skill or movement, it’s better to keep reps per set low to moderate. Every single rep of every single set should be of high quality and look the same as the previous one.

The best way to ensure high quality execution is by doing multiple sets of a movement for lower reps.

Be it a chin-up, pistol squat or ring dip, I’d much rather have a trainee perform 10 triples than three sets of ten in the beginning. The rep-volume remains the same, but with 10 sets we get over three times more opportunities to practice the movement pattern and focus on doing everything correctly than we do with three sets.

More exposure to the skill we’re trying to learn and better execution of it is what drives progress forward.

With beginners, when fatigue sets in towards the end of a higher-rep set, form is bound to break down because they’re not yet strong enough to keep their body tight and perform the movement correctly under fatigue.

Muscling your way through a set with shoddy technique is not what helps us ingrain correct movement patterns.

Tip #4 – Train with a High Frequency

The lats can handle a lot of volume and a high training frequency. So your best bet is to train the chin-up movement as often as possible.

There are basically two ways to implement this, the first one being for those who have got access to a chin-up bar at a moment’s notice (either by virtue of having a chin-up bar at home or living inside a gym) and the second one for those of us who don’t enjoy such luxury.

“Greasing the groove” is a concept I (like probably many others) first came across when reading Pavel Tsatsouline’s material. What it means is that you’ll perform multiple sub-maximal sets over the course of a day, every day, while fresh and going nowhere near muscular failure.

In practice, you’d bang out a rep or two every time you’re in the vicinity of a chin-up bar. If you did 12 doubles every day following this approach, you’d have performed 168 chin-ups by the end of the week, which is a lot of volume.

2. Incorporate Chin-Up Training into Your Warm-Up

If you’re serious about your training, you’re probably following a strength training program with three or four weekly sessions. Before you squat, pull, bench press – or whatever exercises your workouts include – train chins at every session.

Here’s a sample program I’ve used with clients to improve their chin-up prowess. It can be used as a part of your warm-up routine or as a stand-alone plan.

Perform 6-10 singles, doubles or triples (depending on your initial strength levels) multiple times per week. Strive to increase the amount of sets/reps you can do from workout to workout.

Do this for a few weeks, and you’ll get up to 6+ band assisted chins very fast. Once you can perform 8 of them in a row in a single set, move on to the next step.

When you can do all three sets for ten reps, start the cycle over again with another band with more resistance or if you don’t have one, move on to negatives.

Alternate between the band assisted chins and negatives between training sessions. So if you did negatives today, you’ll use the band next time around and vice versa.

As I said previously, if you can do 3×10 with a band with ease, move on to another band with more resistance. Or stay with the same band and set 5×10 as your next goal. Progression is still the name of the game here.

Once you can do 5 sets of 5 reps with 5 full seconds on the negative, load these bad boys up and start over again with 3×3, then work your way up to 5×5 over time and add a little more weight.

Typically a client is ready for their first real chin-up when they’re using 5 kg of extra weight for 5 reps and 5 seconds on the negatives.

What I’ve noticed is that once a trainee gets a single bodyweight chin-up, it’s only a matter of a week or two and they’re already doing doubles, triples or more.

So to anyone saying women can’t do chin-ups, I challenge you to follow this plan and prove the nay-sayers wrong.

Let me know how your chin-up training is going and how else I can help you by leaving a comment below.