If you are looking for off-ice hockey training advice online, I have good and bad news for you.

Let's start with the bad news:

Much of the information you'll find on off-ice hockey training via a quick Google search is published by "trainers" with zero expertise in training athletes.

I've seen too many websites and YouTube/Instagram channels where people's idea of dryland training consists of stickhandling a tennis ball while balancing on a friggin' BOSU ball.

That nonsense has got nothing to do with improving athletic performance when the goal is to build a bigger, stronger, faster and less injury-prone hockey player. 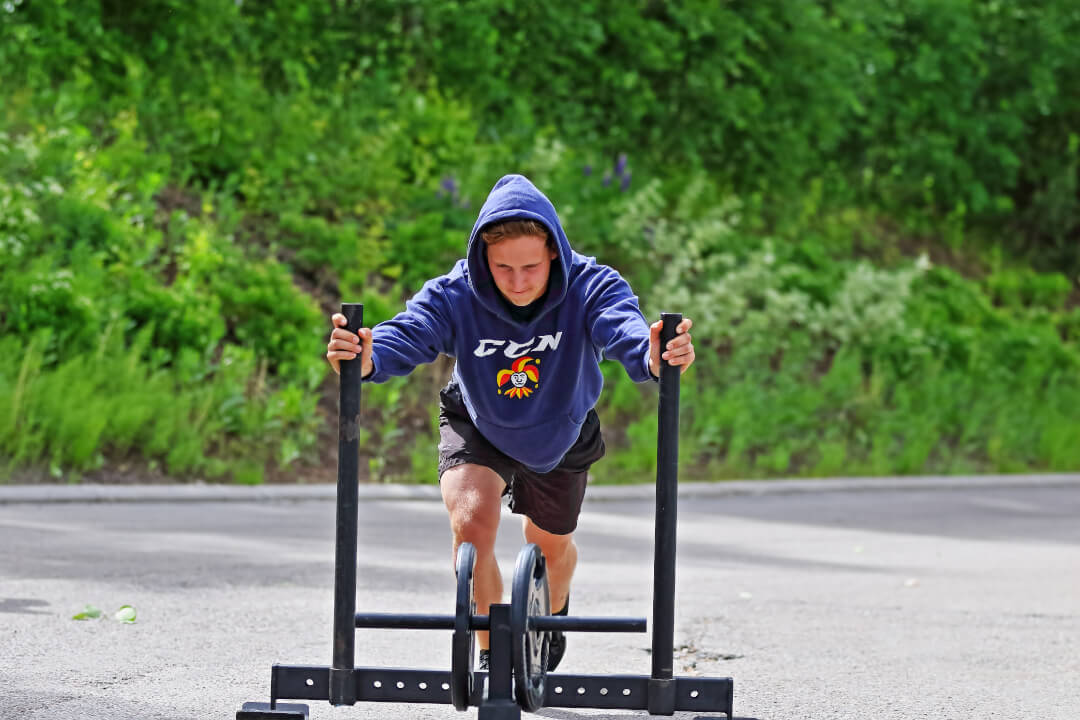 Furthermore, did you know that many of these self-proclaimed hockey training experts on the interwebz don't train any hockey players?

I'm talking about guys who post "motivational" articles, videos and memes on social media all day long instead of doing what they should be doing...

Being no stranger to 12-hour off-season work days coaching my players in the weight room and on the field, any "strength coach" who claims to be in high demand yet spends more time polishing his online presence than down at the gym is full of shit.

And think about this:

If someone markets himself as a hockey strength coach/physical performance specialist...

Hyping up his training program...

That supposedly boosts your strength/speed/conditioning in a big way...

And if his training methods really did work as well as he says...

Then surely a high-level hockey club would have hired him to train their players by now?

So why does he not have a single testimonial from a hockey player or hockey team he has worked with?

Why are all his YouTube videos shot in some crappy basement gym with him demoing all the drills?

And why do you never see any training footage of his athletes lifting weights or doing jumps and sprints?

The answer is simple:

Because these "experts" don't train - and have never trained - anyone!

I find it dubious we have all these charlatans who make their living selling untested and unproven workout programs to their social media followers.

You wouldn't take financial advice from a guy drowning in debt.

So why are you listening to what some random online dude says about off-ice hockey training with no verifiable track record of having helped anyone improve their physical fitness, ever?

Is it too much to ask that if someone is going to bill himself as a hockey training expert, then he should be working with hockey players offline?

And have proof that these athletes have improved under his training?

Alright, enough of that.

Time to step off my soapbox.

If your goal is to become a stronger and faster hockey player, then you'd better focus your off-ice training efforts on these three factors:

You gotta spend way less time on gimmicky exercise methods that look cool but have got nothing to do with improving athletic performance.

Instead, follow a proven training program based on the basics:

How do you know your workout plan is working?

Your lifts go up, you can jump higher and run faster.

Continuously smashing personal bests means you're on the right track.

If you're not getting stronger and faster on your current training plan, change it.

The goal of off-ice hockey training is to enhance your physical qualities.

Not doing a bunch of random stuff so you get a nice sweat going.

Or leaving the gym feeling like you had a "good workout".

Only thing that matters?

I have noticed an alarming trend among off-ice hockey training in recent years.

People don't know how to (and don't want to) lift weights.

Nobody gets strong from that shit.

It ain't strength training
unless you're getting stronger

What does make you stronger then?

The best strength exercises include:

Deadlifts are the simplest - and one of the most beneficial - exercises out there.

You grab something heavy and stand up.

I really like the trap bar deadlift because it places less stress on your lower back compared to conventional deadlifts from the floor with a straight bar.

You'll be hard-pressed finding a better movement for building stronger legs than squats.

While some nitwits choose to waste their life by arguing the merits of unilateral versus bilateral squatting on online training forums, I stay away from such mental midgetry.

Both single- and double-leg squatting are good options and should be used if you don't have any injuries that prevent you from doing so.

If you suck at these, chances are, you're weak or fat.

While some clueless "hockey experts" insist that bench pressing (and upper body strength training in general) serves no other purpose than being a non-functional activity for vain people, the fact remains:

Upper body muscle mass helps protect your joints in collisions and to remove opponents from the puck in the corners.

Olympic lifting purists claim the only right way to do cleans and snatches is to start each lift off the floor and finish it in a deep squat position with your butt touching your ankles.

For non-strength athletes who often lack the requisite mobility to do so, starting a clean in a hang position and catching the bar in a quarter- or half-squat "power" position remains a smarter choice.

You get all the same benefits as with the full lifts with less timing issues and injury risk.

In addition to all the exercises listed above, you'll want to complement low-rep max strength training with higher rep "assistance" work that helps build muscle and keep your joints healthy.

When training the upper body, you don't want to neglect the upper back.

Not only do strong upper back muscles improve your posture, a well-built set of lats, traps, rhomboids and rear delts make your shoulders appear wider, giving you that sexy V-taper hoochie mamas can't resist.

Having seen too many hockey players with limited shoulder mobility - either due to previous shoulder injuries or spending all day hunched over their cell phone screens - I no longer favor barbell military or push presses.

Instead, we do overhead press variations like landmine presses, seated barbell/dumbbell presses and Z presses that put less stress on the shoulder joint.

Hip thrusts are one of the best movements for building a big, strong hockey butt.

You can really add some weight here. When done right, you will experience some nasty glute pumps with these!

You strengthen the spinal erectors, glutes and hamstrings all in one go. Plus, it's such a low-intensity movement that you can do it multiple times per week without hampering your recovery.

It's just that without all the squats, deadlifts and other big movements in your program, core exercises alone won't do jack for your performance.

I've seen too many junior players walk into my gym having "worked on their core" for years.

Yet they're weaker than puppy piss. Can't lift their way out of a paper bag.

So what did you really get from all that "core work", huh?

Base your strength training program around the exercises listed above, then work up to heavy weights using good lifting form over the next few years.

Do that and you'll be far ahead of your competition who haven't gained an ounce of muscle or one iota of strength on their useless "hockey-specific" workouts.

You know, the ones where you split squat 20-pound dumbbells while balancing on a Bosu ball or attempt to mimic the skating stride with a MiniBand wrapped around your ankles.

Leave that Mickey Mouse stuff for the weak and lazy.

Lift heavy weights with good form over a full range of motion so you'll build strength and muscle that carries over to the ice.

Learning to land should be #1 priority in the early stages of jump training.

Because beginning jump training without first laying a solid foundation in the form of good landing mechanics is like building a house on quicksand.

Performing thousands of jumps with bad landing technique over the course of a few years is one of the best ways to inflict knee and low back injuries.

While many athletes and coaches pay little to no attention to proper landing form, taking such a banal thing for granted, my experience underlines the importance of it.

I have seen professional athletes who can't perform a textbook landing with their chest up, butt back and knees in line with the toes.

Learning how to absorb force is more important than generating force with beginner athletes.

That's why the first few sessions of my jump program for high school athletes (= newbies) don't include any jumps. Only practicing correct landing position.

This "slow cooking" approach to jump training is even more important with athletes today than it used to be.

We have lost so much of our general athletic ability that you can't expect kids to possess the same natural movement patterns that we did a decade or two ago.

Looking back to my own days as a youth athlete, nobody ever taught me how to jump or land.

But playing multiple sports and engaging in free play, climbing trees and jumping off cliffs - almost completely foreign concepts to many young athletes these days - I learned how to do all that without receiving any formal instruction.

Once good landing mechanics become second nature, we can shift our focus to leaving the ground (a.k.a. force production).

Further down the line, as the players progress, we'll move on to more reactive jump variations where the goal is to enhance an athlete's elasticity.

Similar to what I said about strength training earlier in this article:

If a speed drill or exercise doesn't help you become a faster athlete, then you're not doing proper speed training.

Common speed training mistakes include insufficient rest periods between reps, doing too much volume and running at submaximal speed.

The late Canadian sprint coach Charlie Francis advocated running above 95% of your max when training for speed. Anything below that would not qualify as true speed training.

Since hockey consists of mainly short bursts of speed in multiple directions, your ability to rapidly accelerate and decelerate plays a bigger role than pure maximal linear speed or speed endurance.

Thus, you'll want to perform shorter sprints (we mostly do 10-30 m) and agility drills to reflect this aspect of the game in your dryland speed training.

Shorter distances make sense from an injury management standpoint as well. As sprinting distances increase, so does the risk of groin strains and hamstring pulls.

With more advanced athletes, jump/sprint combos can also be used to train their acceleration and deceleration abilities.

Furthermore, remember that skating is different from running.

So you also need to do sprints and change-of-direction drills on the ice to truly see a carryover from your dryland speed training.

Follow these guidelines for strength, jump and speed training this off-season.

I wouldn't be surprised if that led to your best season yet.

P.S. To any hockey player who wants a proven plan to gain strength, speed and size to elevate their game...

Be sure to check it out and read all player and coach testimonials by clicking here.