Variation Without Change: The Key to Making Gains Forever
0

Variation Without Change: The Key to Making Gains Forever

An article of mine on in-season training for athletes recently appeared on STACK.com that garnered positive reactions and quite a few Facebook and Twitter shares – if you haven’t read it yet, go check it out now. 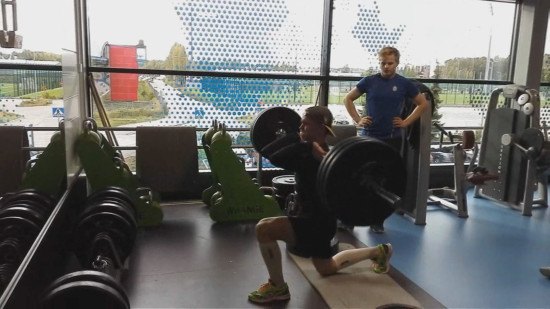 Ever since then, I’ve been receiving multiple emails from young athletes, the content of which can be boiled down to:

Every resource and training program I’ve seen clearly states one shouldn’t expect strength and performance gains in-season, and that you can only maintain what you’ve gained in the off-season.

Now you’re telling me in-season “maintenance training” is a waste of time. Can you explain how to train during the competitive season for strength gains?”

While a thorough explanation on how to design a comprehensive in-season training program would require its own article, let’s take a behind-the-scenes look at one central component in our youth hockey training programs…

We’re now a month into a new hockey season with my U20 and U17 teams, and guys are hitting PR’s week after week.

And these are not only small jumps in performance, either.

Several of our U20 players can now perform 5-6 reps of chin-ups with an additional 20-25 kg, and multiple sets of 6 reps with 20-30 kg on ring push-ups, whereas just 2 or 3 months ago they were using bodyweight on these same exercises.

Below you will see Finnish U20 national team player Joonas Niemelä hitting 25 kg for 5 reps on weighted chin-ups.

And here’s U20 national team player Kasper Björkqvist, who just finished a monster week with 7 goals in 3 games, power snatching 60 kg for an easy double.

Much of the success we’re seeing in the weight room comes down to a principle few people have ever heard of:

It’s a simple but powerful concept that I originally picked up from Canadian strength coach Charles Poliquin – and you can use it to improve your numbers in the weight room all year long.

Many athletes fail to make gains after a while because they don’t vary their training enough. Switching things up by changing set/rep schemes or lifting tempo is one way to do that, but in the long run, you need to mix things up more.

No matter how gifted you are or how much effort you put into training, the body will adapt to doing the same exercise over and over. That means your progress will come to a screeching halt sooner or later.

At that point you can either keep banging your head against that invisible wall known as a training plateau by refusing to modify your training program, or find a better way to spur further improvements.

But you can’t completely abandon your training philosophy in search of the next best thing. You don’t go from barbell squatting to squatting on a Bosu when you’re after performance improvements that will transfer onto the ice.

As you must have guessed by now… vary the exercise without changing it.

When you perform an exercise with various grips, use a different training implement or change limb position, suddenly that old and boring movement becomes something new, different and most importantly – you can keep making gains.

To give you an idea of how to put this to work, let’s use single-leg squat variations as an example…

With my U16 hockey players that I’ve been training for a few weeks now, we’re currently using the goblet split squat and will move on to DB split squats as they get stronger and holding a dumbbell in the goblet position becomes uncomfortable.

Having trained with me for five months now, the U17 players have progressed to both dumbbell and barbell single-leg squat variations – including split squats, reverse lunges and rear-foot elevated split squats.

The U20 team uses only barbells on single-leg squats, since the biggest dumbbells we have available at the rink where we train no longer provide a sufficient training stimulus at 35 kg a piece.

As you can see, one basic exercise can be modified into numerous variations based on a trainee’s experience and fitness level, the training stimulus we’re after and the equipment available.

You can apply this same idea with any movement pattern or exercise.

On a vertical pull you could do regular chin-ups, pull-ups, neutral grip chin-ups and ring chin-ups.

Bench presses performed at various degrees of incline (flat, 15-30 degrees, 45 degrees) with a barbell or dumbbell (both unilaterally and bilaterally) could constitute your horizontal push pattern. Do the math – that’s at least 9 different variations of bench presses right there!

And when we combine this principle of varying an exercise without changing the complete movement pattern in a smart training plan fluctuating volume and intensity from phase to phase, guys get stronger even during the hockey season.

However, claiming that a single training component can make all the difference in your strength program would be too simplistic.

Program design and coaching skills, buy-in from players, the training culture you foster and the level of intrinsic motivation an athlete possesses all contribute to the success of a solid dryland training program.

But understanding and properly executing the concept of varying your training without changing the fundamental movement patterns will definitely allow you to make solid strength gains for a very long time, no matter whether we’re talking off-season or in-season training.

Want to know EXACTLY how to apply the training methods I discuss in this post to reach the next level in YOUR training?

Then check this out – you’re gonna love it…

How to Dominate the Competition This Hockey Season

Experience the fastest strength gains of your career
and take your game to the next level.