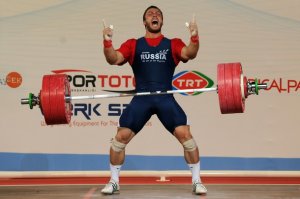 I recently had the chance to attend a two-day weightlifting seminar hosted by a former World Champion weightlifter.

Each of the seminar days began with a short 30-45 minute lecture after which we proceeded to the hands-on section of the event.

Many ideas the host presented resonated with me because of their simplicity and similarity to my training philosophy that I try to pass on to my trainees.

Much of what I’m listing in this post and writing about on this blog in general is very basic stuff but in my experience, very little of that is typically applied in the modern gym setting, so let’s get down to the basics again.

1. Strength Is a Skill

Strength, especially in a sport like weightlifting, is a skill.

I know this ain’t a revolutionary thought by any stretch of imagination, but you’d be surprised by how many guys still don’t grok this concept.

Just as any other task that involves a skill element, like learning to skate on ice or bat a baseball, frequent exposure to and practice of the skill you wish to master presents the cornerstone of any sensible strength training program.

That’s why I’m such a big believer in high frequency training.

Training a movement pattern or lift six times a week for 30 minutes at a time will lead to faster progress instead of three training sessions lasting 60 minutes each, even though the amount of time invested remains the same in both scenarios.

Practicing a task in a fresh state again and again leads to positive adaptations in the nervous system, which in turn will allow us to master said task in a shorter time frame.

I’ve found it to be quite an interesting phenomenon that in the Internet era, everyone claims to squat at least 500 pounds “to parallel” yet the times I’ve personally witnessed such feats taking place in a gym setting can be counted with the fingers of my left hand.

Furthermore, for a healthy male, squatting two times his own body weight is a worthy goal to pursue and is not a feat to be easily dismissed, though if you spend any time on various message boards on training and believe all the noise circling around, you’ll quickly come to the conclusion that reaching a double body weight squat is as easy as spotting a crook in a room full of politicians.

Just to put things into perspective, a 2.5 x BW squat would be considered excellent for pretty much anyone outside of competitive power- or weightlifting, and generally takes years of consistent work to build up to.

This kinda ties back to the point I made above.

Something I’ve noticed is that the expression “squatting to parallel” is a rather arbitrary one because guys regularly misuse it in order to inflate their gym numbers.

Furthermore, in his book Advances in Functional Training, Boyle goes on to state that:

“When I was a college football strength coach, I’d tell our football coaches when they were recruiting a kid to divide his squat by two. A high school kid who claimed to squat 500 pounds would usually get a little more than half that on test day.

All of the descriptions, parallel, hamstring parallel and ninety degrees, are euphemisms for lousy squats made by lousy squatters or, worse yet, by their coaches. I’ve had strength coaches tell me, “My guys have trouble getting that low.” 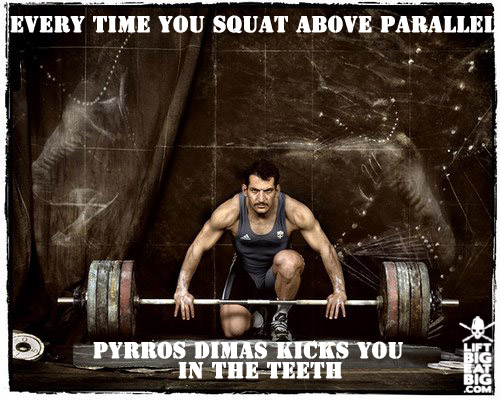 Moreover, contrary to common knowledge, performing partial squats puts more stress on the knees than squatting to proper depth while the added bar weight that the shortened range of motion in a partial squat allows results in a reduction in mobility and a hundred pounds more compressive load on the spine.

Another reason to perform lifts over the entire ROM.

The Rule of 10.000 states that you need to get that many reps under your belt before being considered somewhat proficient at a task. And in the case of strength training, obviously, it refers to practicing a certain lift such as the squat.

If we break down the math on this, suppose you perform 70 reps of squats per week for 48 weeks in a year, which would give you four weeks in a year to vacation, nurse a cold or otherwise stay out of the gym.

It takes 3 YEARS to get moderately proficient at a given lift.

Have you performed the squat for 70 reps a week year-round for the past 3 years?

Then work on it!

Does the point above mean that you could do those 10.000 reps any way you please and you’ll automatically have gained the skill to squat proficiently?

The quality of reps is even more important than the quantity.

This was something the instructor at the weightlifting seminar I attended stressed repeatedly while also mentioning that it takes seven GOOD reps to counter-act the negative effects of a single BAD rep performed in training.

This is something I keep learning over and over again as the years pass by.

There’s an inverse relationship between the amount of weight on the bar and the quality of a lift performed.

Everybody wants to pile on as much weight as possible on the bar, and usually that leads to breakdowns in form. I see a lot of this when guys send me videos to check out their form.

I remember seeing a video of Dave Tate a few years ago where he stated that to improve your form, technique work should be done at around 50% of your 1RM, and I would agree with his thoughts on that.

What that means is that if you currently squat 400 pounds with so-so form, cut the weight on the bar in half (200 pounds) and start grooving the movement pattern and eventually you’ll surpass your previous maxes with good technique, which not only helps you get stronger in the future, it will keep you in the game longer by reducing injury risk.

I know working at a half of what you’re capable of presents a huge ego crush for many guys but our goal in training is not to impress random guys at the gym who couldn’t care less how much you lift, we’re training to get better over time.

Nothing less than picture-perfect technique is acceptable to me on lighter weights. Think about it, if you perform a set of squats at 70% of your 1RM with sloppy form, what’s gonna happen when you move up into the 90%+ range?

It won’t get any prettier, that’s for sure.

The truth is, when attempting a true 1RM lift, a small degree of breakdown in technique is almost inevitable and I wouldn’t worry about that too much.

If you just pulled a life-time PR on the deadlift, fighting, trembling, struggling to get the weight to lockout for five full seconds that felt like an eternity, do you really need some geek with a sextant coming up to you saying you entered into 2.8 degrees of lumbar spine flexion during the effort?

I’m not saying 1RM attempts shouldn’t look good. Quite to the contrary, they indeed should. But a small technical flaw isn’t something to get worked up over, as long as those flaws are not present at lower intensities (see point #5).

While this may seem like a weird concept at first glance, it does make sense when you think about it for a moment.

Take a look at a kid building a sand castle with a plastic shovel or playing with toy cars on the floor while sitting in a bottom squat position. They depict perfect squat form.

How many adults possess the same degree of mobility?

I can tell you that outside of athletics, especially the sport of weightlifting where above average mobility is a requirement for pretty much anyone participating in the sport, we’re talking about less than 1% of the adult population capable of reaching and maintaining such a position.

All of the years spent sitting in a hunch-back position over a computer screen or in front of the TV quickly add up and we lose our natural ability to move freely without pain and discomfort unless we do something about it.

That’s why doing mobility drills on a daily basis to gain back what we’ve lost over our adult years is something we should all dedicate more time and effort to.