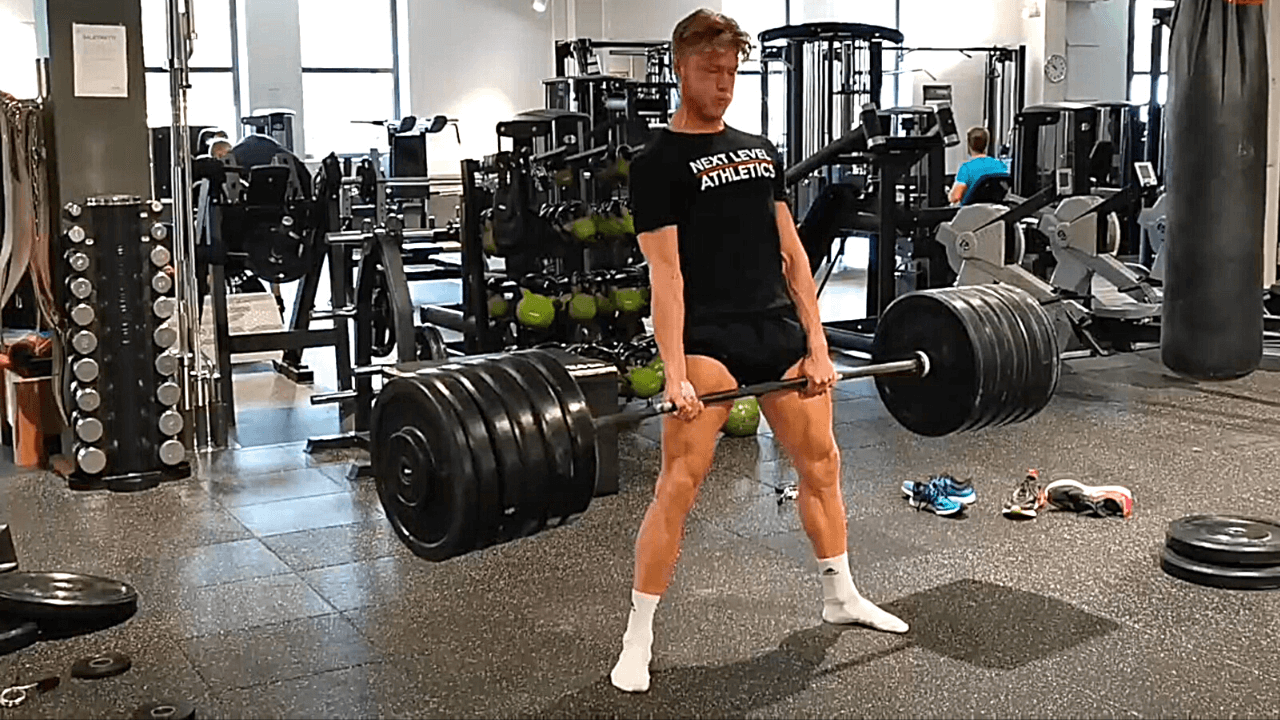 Dryland hockey training has the potential to either rocket or ruin your game.

From injurious gym exercises to copying the latest Instagram "NHL workout", too many athletes self-sabotage their progress.

By doing what other guys can't or won't, you can take your physical performance to heights your competition will never experience.

Why Is Dryland Training Important For Hockey Players?

All the best hockey players in the world train hard off the ice to gain lean muscle mass, improve skating speed, and develop outstanding stamina that makes the difference when the game is on the line.

In today's fast-paced, high-force game, you can NOT reach your full potential as an athlete without taking physical preparation seriously.

To give you a glimpse into how top NHL players train in the summer, here's a video shot at Prentiss Hockey Performance in Darien, Connecticut.

I have fond memories of this gym. I interned there with NHL strength coach Ben Prentiss – who taught me much of what I know about training hockey players – in the summer of 2014.

The summer is when hockey players are made.

I've seen it over and over:

An athlete who dedicates himself to gym workouts between May and August shows up to camp a completely different player.

From exploding away from your man...

And throwing guys around in board battles...

To sky-high confidence with the puck on your stick...

One great off-season can benefit your game in ways you couldn't have imagined.

That often translates into a career year – scoring more goals than ever before, winning a championship or individual award, making the jump to a better team or league...

Rack up five or more of those summers in a row?

Here are seven dryland hockey training tips to achieve that.

You show up to the gym, glance around to see which equipment is free, take about four seconds to mull over what body part or exercise you feel like doing today, then begin your workout.

You might as well have stayed home if that's the best you can do.

Without a plan in place, you're doomed to fail.

You're just doing a collection of random exercises in random order, working up a skin-splitting pump, and wearing that crippling post-workout soreness as a badge of honor.

But are you getting any better?

Winging your workouts is the #1 reason athletes can go to the gym for years, only to end up weaker and slower than before.

And, once you hop on a proper off-ice program, your numbers take off as if you were on steroids.

Just read what happened to one of my D1 hockey players once he got serious about lifting for strength, muscle mass, and athletic performance:

When was the last time YOU gained 60+ pounds on your squat and bench press in a single summer?

For roughly 99.2% of hockey players, it never happens.

Because your training sucks; that's why.

Get serious or don't even bother.

It never ceases to amaze me when an athlete says he needs to gain strength, then bangs out 3x10-12 on every exercise.

Endless bodybuilding pump work makes you tired, but not STRONG.

To get stronger, you must lift heavier weights than before.

When I say "lift heavy", I don't mean you should slap 300 pounds on the bar and get crushed by it.

I'm talking about using challenging weights in the 1-6 rep range with excellent form.

Doing so improves force production and neural efficiency – the interplay between your brain, nervous system, and muscles.

Why should that matter?

Because neurally efficient athletes who can produce a ton of force jump HIGHER and skate FASTER.

The best exercises for low-rep, max strength training include:

I'm now going to give you a trick that will let you make more progress in the gym than anything else you'll ever do.

The simple act of jotting down your numbers – the exercises you do, the weights you use, number of reps completed, length of rest periods – makes you addicted to the process.

Watching your numbers go up every week provides an endless source of training motivation and buy-in with your program.

When you're constantly shattering personal bests, and have black-on-white proof of it in your journal, you can't wait to get back in the gym for more!

That's the secret to making gains most people can only dream of.

If you aren't tracking your lifts and performance increases over time, you're just guessing.

Getting freaky strong in the weight room isn't enough.

You must also work on your explosive abilities by sprinting and jumping.

Great athletes stand out thanks to their ability to move.

Evading opponents under pressure, changing directions on a dime, beating your man to the puck over three to five powerful steps...

While a lot of it comes down to natural talent and your ability to read plays two or three moments ahead, you can definitely improve your speed and quickness through smart dryland hockey training.

This video reveals the top 5 plyometric exercises that add springs to your legs.

You can't compensate for a missing turbo button with tons of cardio.

Yet, that's exactly what most hockey players do.

Getting "highly" conditioned without increasing velocity and force production (strength, speed and power) only guarantees you'll skate the entire game behind the play.

But hey, that "superior" conditioning allowed you to get beat for a full 60 minutes.

Just think about it:

What will make the biggest difference in your game?

Being the fastest and strongest guy on the ice...

Or playing every shift stuck in third gear, always a step too slow to make a difference?

That's why you get strong, jacked, and explosive first.

Then you bring up your conditioning, so you can repeatedly slingshot away from your man over three full periods (and overtime, when needed).

No discussion about dryland hockey training would be complete without mentioning nutrition.

Lots of athletes focus so much on what goes on in the gym that they fail to take their diet seriously.

What good is it to train hard five or six days per week, only to undermine all that effort by stuffing your face with Twinkies, Dunkin' Donuts, or other junk filled with sugar and harmful vegetable oils.

Nutrition is the most ignored and most misunderstood part of a hockey player's physical preparation.

That's why, despite all the hours they spend in the gym, I see so many junior, college, and pro guys with unathletic physiques.

How can you call yourself an athlete when you dare to show up at camp rocking a dad bod – with the flabby gut and spaghetti arms to boot – like some office rat stuck in 9-5 Excel data sheet hell?

Get a grip, dammit!

Drop the extra body fat, pack some muscle on your frame, and get ripped.

This video shows exactly how to get in fantastic shape through healthy nutrition habits.

In a world filled with exaggerations, fabrications, and blatant lies, it's normal to expect to undergo a drastic body transformation – the kind you see plastered all over infomercials and fitness magazines – in a flash.

Add two inches to your biceps in 4 weeks!

It takes YEARS to build a standout physique capable of lifting weights that strike fear in the hearts of most.

A horde of new members, off the back of yet another soon-to-fail New Year's pledge, storm gyms all over the nation in the first week of January...

These peeps signed up for a Planet Fitness membership because they want to lose those 40 extra pounds they've gained since college...

Or to chisel a superhero body Chris Hemsworth would be proud of...

Or to go from a skinny dude girls reject to Chad Thundercock...

Only to find out achieving it takes MUCH longer than a few weeks.

Most people give up long before the going gets good.

Guys who don't make fitness and healthy eating a permanent part of their lifestyle will never get to taste the sweet fruits of their labor – where you forge a completely new you over the next decade or two through iron and sweat.

Unless you're born with great strength and muscle building genetics (which I CERTAINLY wasn't) you have to fight for EVERY extra pound on the bar and ounce of muscle on your frame.

Right up until college, I was a skinny-fat weakling who ran marathons but, like so many other athletes, got stuck lifting the same weights month after month in the gym.

I HATED how my body looked.

So I decided to change.

I transformed my body and performance through sheer consistency:

It took me 14 years of serious training to perform a weighted chin-up with 60 kilograms (132 pounds).

And, it took me 20 years to go from a skinny-fat weakling to this:

If that sounds like a long time... that's because it IS.

Going to the gym 4-6 times per week for 10+ years, never skipping workouts, always striving to beat the numbers in your training journal, tracking your calories and macros...

And that's what gets results.

What Is The Best Exercise For Hockey?

This is usually asked by a guy who rocks linguine arms and half-squats 185 pounds.

Let me make it clear, once and for all:

There's no one single best exercise.

Smart athletes use a variety of lifts, drills, and movements to get stronger and faster.

Check out these 13 hockey exercises to get started.

Is Squatting Good For Hockey?

Yes, it's a fundamental movement for leg strength and speed development.

Hockey players have underdeveloped glutes and hamstrings compared to quads.

Unless you bring these large, powerful muscle groups on the backside of your leg up to snuff, you can say goodbye to skating fast.

You also set yourself up for injury, both on the ice and in the gym.

Deadlifts are an excellent movement to strengthen your entire posterior chain – the glutes, hamstrings, and spinal erectors.

How Can I Make My Legs Stronger For Hockey?

It boils down to this:

If you want strong legs, you must lift challenging weights.

That means using squats, deadlifts, power cleans, and other movements that allow for ever-increasing loads in low to moderate rep ranges.

That crap attracts eyeballs because it looks cool and trendy...

But it does NOT make you strong.

For a time-tested dryland hockey training program that produces strong and explosive athletes like clockwork, visit: