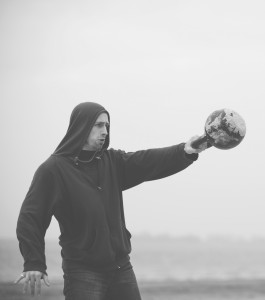 As you know, I’ve been traveling extensively all over the place in the past couple of months.

First it was Eric Cressey’s seminar on shoulder health & lower extremity mobility in Slovenia, then attending a bodyweight training seminar with Al and Danny Kavadlo in Germany, after that I went to one of the biggest S&C seminars of the year, visited some of the most established training facilities and coaches in the industry, observed how NHL players train in the off-season and so on…

At this rate I’ll soon be like a modern day Alexander with no worlds left to conquer.

The one thing that kept me sane (and healthy) between long flights and train rides, nights of subpar sleep and countless BLT’s was training.

Since I had no time and intention to find a passable gym in every new city I visited, the only thing I could count on was utilizing a chin-up bar easily findable in most outdoor parks, and a pair of gymnastic rings I carried in my luggage eveywhere I went for short, intense training sessions.

During my trip in the US I stumbled upon a great book – Rough Strength Files: 42 Ideas on Low-Tech Strength Training – on minimalist training by a Ukrainian fella named Alex Zinchenko.

After hopping through Providence and Boston, I landed in a small town called Darien – about an hour away from New York near Stamford, Connecticut.

If I told you that for many NHL players Darien, CT – a tiny community of 20 000 people – is THE PLACE to be during the summer months, what would you say? I wouldn’t be surprised if you called bullshit on that statement.

But the reason NHL’ers flock to Darien in droves lies in the fact that it’s home to Prentiss Hockey Performance – a 2000 square foot training facility run by strength coach Ben Prentiss, situated inside a former gas station just off I-95 that Prentiss converted into a gym some 15 years ago.

Ben is a relatively unknown guy (at least in the Internetland of strength & conditioning) because unlike many other trainers more concerned with building a huge internet presence, he actually prefers working with his athletes in the gym day in, day out.

Needless to say, there are not many people in the business who can match that roster.

After the Perform Better Summit in Providence, my journey on the U.S. East Coast took me to Boston.

On my first day in the city I headed into the Sports Museum after a great early morning training session at the Charles River playground, which is a small park with various pull-up bars and other implements that allow joggers and other trainees to get in some bodyweight action while enjoying the beautiful Charles River scenery.

The Sports Museum is located neatly inside TD Garden where the Bruins play their home games.

View from the nosebleed section at TD Garden

Sometime last year, I would be more precise but that would involve deep reflection and arithmetic, two things I am adamantly opposed to, I made the decision that 2014 would be the year I traveled the world, attended several seminars and talked face-to-face with some of the brightest minds in the strength & conditioning / fitness industry.

Not only that, I was determined to make it to the States this summer even if I had to cut off all my limbs and crawl there on my tongue. So after an 8-hour flight and a short stop in New York, I found myself at one of the biggest training seminars of the year with 1200 other attendees at the Perform Better Summit in Providence, Rhode Island.

To give you a glimpse into the quality of the speakers at the event, Mark Verstegen, who was supposed to give the first lecture at the seminar on Friday morning, had to cancel because he flew over to assist the German national football team at the World Cup in Brazil.

Boyle, Rooney, Cook, McGill… this pretty much reads like the who’s who of fitness

Last weekend I had the chance to attend the Progressive Calisthenics Certification seminar hosted by Al and Danny Kavadlo in Munich.

For those of you not in the know, the Kavadlo brothers are arguably the most well-known calisthenics instructors on the planet.

Al especially has written several books on the topic of advanced bodyweight training for strength, and both of them have been featured in the bestselling Convict Conditioning series (you can see them on the cover of CC2 to the left).

Most guys would probably describe their ideal vacation as a combination of sun, sea, surfing and leisurely sipping pina coladas on the beach while mingling with scantily clad young ladies.

Well, I’m not most people.

So I decided to dedicate this summer to traveling to far away places like Ljubljana, Slovenia to hear one of the top strength and conditioning coaches in the US, Eric Cressey, talk about shoulder performance and lower extremity mobility as I did with my buddy Teemu Mäki this past weekend.

It’s that time of the month again when I’m dishing out a few good articles I’ve stumbled upon on other sites. Here are four good reads for the month of March.

Quite likely the most comprehensive, right on the money article ever written for the natural strength trainee.

Instead of wasting your employer’s time and money by killing your brain cells while mindlessly idling away the afternoon on social media, do something productive in the office and read this post.