Strength Training for Ice Hockey Is Now Available for Pre-Order

Today is the day:

My new book Strength Training for Ice Hockey is up for grabs. 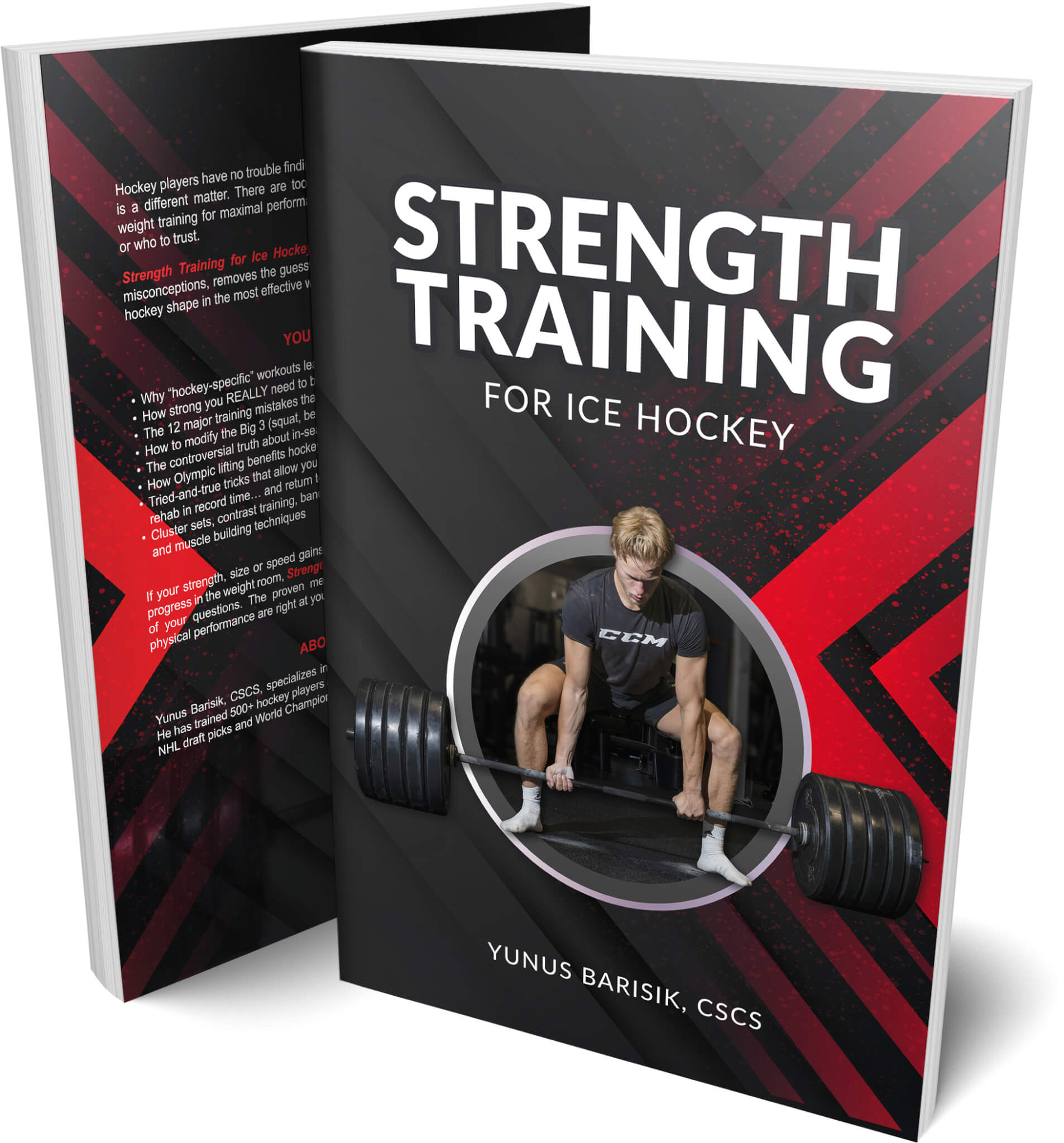 FYI, this isn’t a rehashed compilation of my previous articles… and I’m not serving you some lukewarm lifting leftovers from yesteryear.

Strength Training for Ice Hockey includes the most up-to-date training tips, tactics and methods I use to get hockey players strong and jacked. It took me 2.5 years to research, organize, tweak, write and edit the whole shebang.

And the result is the most practical book on off-ice training EVER published. Strength Training for Ice Hockey spans 275 pages and includes almost 300 references to relevant scientific studies.

Despite this fact, you don’t need a PhD in Exercise Science to grasp what I share with you inside. The tone of this book is informal and conversational, yet highly informational. So ANYONE can absorb the key points, implement the advice and dominate the weight room.

I’m just going to list the most important details about this offer in bullet points to save you time:

* You have the chance to pre-order Strength Training for Ice Hockey at 50% off today (regular price: $39.95). All I ask is that you cover the printing, shipping and handling costs which total $19.95.

* The paperback version starts shipping September 15, 2020 and the e-book will be available for download on August 31.

* You have the option to secure your copy with my signature and turn it into a cherished collector’s item for a few extra bucks at checkout.

* I have hidden a special, unannounced bonus (value: $29.95) on the thank you page just to thank you for ordering the book and supporting my work. That’s right… The value of this bonus *alone* exceeds the tiny price you pay for the entire book. Simply click one single button at the end of the checkout and it’s all yours.

Here’s where to get Strength Training for Ice Hockey at 50% off (and snatch up all the extra goodies along with it):

My New Hockey Training Book Has Just Been Released

My new book The Hockey Player's Guide to Peak Performance: Volume 2 is out.

It contains some of my best, most popular and most lesson-dense articles on hockey strength and conditioning.

The book is divided into four main chapters. Topics include:

There’s over 25 articles and 150+ pages worth of training nuggets for you to enjoy.

The cost? A few measly bucks. Which makes this one a steal.

Here's where to get it:

The Hockey Player’s Guide to Peak Performance: Volume 1 Is Live!

My new book The Hockey Player's Guide to Peak Performance: Volume 1 is out.

It's a compilation of my best, most popular and most lesson-dense articles on physically preparing hockey players for the demands of today's fast-paced game.

The book is divided into four main chapters. Main topics include:

The book contains over 25 articles and 200+ pages of timeless training advice.

It explains pretty much everything you would ever need to know to create stronger, faster and more injury-resistant hockey players.

And, it's SUPER affordable.

Here's where to get it:

My Interview on DKPittsburghSports.com

In case you missed it, I was interviewed by DK Pittsburgh Sports the other week.

As part of their in-depth coverage of the Pittsburgh Penguins, they wanted to know how Pens prospect Kasper Björkqvist (who has been training with me for the past five years) was able to smash the club's strength and conditioning records at age 21.

So, I spilled the beans on his dryland training methods throughout his junior and college years.

These are just some of the things we covered in the interview:

* The 3 factors behind his exceptional fitness

* The 4 exercise categories that translate into more explosive skating

* How Kasper's training changed this summer after his shoulder surgery

Here's the link to the interview again.

P.S. Looking for a training program to achieve exceptional fitness?

Then check this out:

"He has a winning pedigree. He's a competitive guy with good athleticism and quickness."

That's what Minnesota scouts said about my boy, Filip Lindberg, when the Wild picked him in the 2019 NHL Draft this summer.

This makes it the fourth year in a row when one or more of my players have been drafted to the NHL.

Coincidence or not, "Fille" has been training with me for the past four, very successful years.

He won the Best Goalie Award in the U18 Finnish Elite League a couple of years back, took home gold at the 2019 World Junior Championship and backstopped UMass Amherst to the NCAA Final as a freshman for the first time in school history.

And now he's one more step closer to his NHL dream as part of the Wild prospect pool.

One look at his body tells you why he's so successful as a hockey player.

Chiseled abs, veiny arms, shredded like Wolverine… No wonder Fille is known for his athleticism and quickness on the ice.

Not many people know this but immediately after the 2019 NHL Draft, he headed over to Minnesota for the Wild prospect development camp...

Fille posted TOP 5 results in all fitness tests and ranked #2 overall at camp.

Right after development camp he got back into the grind and pulled a big PR on trap bar deadlifts...

A post shared by Next Level Athletics (@nextlevelstrengthconditioning) on Jul 3, 2019 at 3:37am PDT

With six weeks left in the off-season, it's safe to say he'll enter his sophomore year at UMass Amherst stronger and more jacked than ever.

And how did he get in such excellent physical shape, you ask?

By following the off-ice programs inside my Next Level Hockey Training System.

It's available to you behind this shiny little link:

A few days ago, my good buddy and long-time athlete Kasper Björkqvist signed his first pro contract with the Pittsburgh Penguins.

Kasper is now in his 5th summer training with me, so if you have watched any of our training videos before you probably have seen him lift some pretty impressive weights.

I feel proud for Kasper signing with one of the best organizations in the NHL - yet, our work is still far from over.

He's physically ready to play in the league (and has been for a couple of years now). Now comes the part where he has to prove he belongs there.

That means we have another hard summer busting ass in the weight room ahead of us to prepare him for the NHL.

P.S. To discover how Kasper built NHL-level strength, size and power during his junior and college years, click here.

So join me in congratulating Head Coach Jussi Ahokas and the entire Finnish U20 National Team on their success.

Well done, boys. 3 golds in 6 years at the WJC is a helluva feat!

Special props to team Captain Aarne Talvitie (Penn State), Filip Lindberg (UMass), Urho Vaakanainen (Boston Bruins) and Jesse Ylönen (Pelicans Lahti). I had the chance to work with these fine players in the juniors before they went on to play college/pro hockey.

Running the numbers in my head, that makes 10 gold medal winners at 4 different U18 & U20 World Championships since 2016 who have trained in my weight room.

I'm especially proud of my boy Fille Lindberg who was playing for our second team at the U18 level when we started working together three years ago.

You know, Fille and I often visit this neat restaurant in downtown Helsinki called Tokyo 55 in the off-season. It's a great place to sit down, have a tasty meal and talk about hockey and life.

Last summer, over several post-workout, all-you-can-eat sushi buffets, we discussed how he'd have to approach his off-season training and freshman season at UMass so he'd make the U20 team.

He does everything I tell him in the gym without questioning or second-guessing. He doesn't drink alcohol, doesn't eat pizza or candy, and gets his 9-10 hours of sleep every night. That's why he's successful and will go far as an athlete.

There's a shirtless picture on my Instagram where you can see how this approach is working for him. He's ripped out of his mind.

To honor my buddy Fille and the entire Finland U20 National Team, I'm heading over to a sushi buffet tonight. I'm gonna celebrate by eating and drinking myself into a food coma.

I'm not much of a drinker but this is one of those rare moments where I plan to chug down a vodka shot or two to go with the makis, nigiris and sashimis.

In the words of the late NCAA Champion and Stanley Champion, Coach "Badger Bob" Johnson:

"It's a great day for hockey!"

P.S. For a training program that produces champions, go to: